ARCTEQ protection devices, which we use at 42technology, meet the strict requirement criteria of the European Research Center CERN in Geneva. Therefore, the two parties again signed a framework agreement for five years.

CERN relies on a high-quality, reliable and safe energy supply and uses around 250 ARCTEQ protection devices for its power grid and electrical energy supply for this purpose.

After 2017, this is the second time in a row that ARCTEQ has won the tender. At that time, a contract was signed for more than 300 protection devices for one of the largest and most prestigious scientific research centers.

"We are very pleased that our technically up-to-date protection units met the strict criteria and successfully passed the evaluation process, allowing us to continue our partnership with CERN," announced Robert Olander, ARCTEQ's sales and marketing manager.

For ARCTEQ, a company mainly active in export, it means a lot that its products have once again prevailed in the evaluation of such a world-renowned institute as CERN.

Part of a multifaceted whole
At CERN, ARCTEQ relays are part of a multifaceted electrical system. When the particle accelerators are operating normally, CERN consumes approximately 1.2 TWh of electrical energy per year, with peaks of up to 180 MW. The research center's power grid consists of more than a hundred medium- and high-voltage substations with 3.3 kV, 18 KV, 66 kV, as well as 400 kV voltage levels. Different protection relay technologies and commercial brands coexist simultaneously, from the electromechanical relays of the sixties, to static relays of the eighties, to the fully digital IEC 61850-based relays.

ARCTEQ relays are used at CERN in numerous substations, including ME9, one of the three substations that form the backbone of the so-called 18 kV auto-transfer. This auto-transfer is an automatic network reconfiguration system capable of ensuring the power supply in the event of a failure of the main supply from France or an internal fault during critical load peaks, by power from Switzerland. Another notable application is the PLC accelerator, a double ring network consisting of six substations, over a perimeter of 7 kilometers, which is now almost exclusively protected by ARCTEQ relays.

ARCTEQ Relay
ARQTEC Relay was founded in 2010 in Vaasa, Finland. The company develops and manufactures various power grid protection and control products, which it markets in over 40 countries. More than 90% of ARQTEC products are exported. The company employs 37 people. 75% of the company is owned by ENSTO, a Finnish technology company, while the remaining 25% shares are held by ARCTEQ executives. 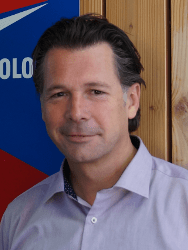